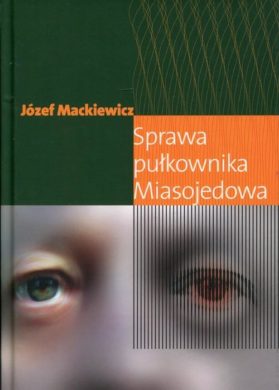 The Case of Colonel Miasojedow’ 1962

In the publisher’s description we can read that it is a novel in which persons, dates and events are authentic; almost documentary and at the same time constituting of a huge artistic achievement novel.

The novel consists of two parts – one describes the life of Sergey Miasojedov, the other – his wife Klara Miasojedow. Sergiusz Miasojedow was a colonel of the tsarist gendarmerie who during the First World War in 1915 was accused and sentenced to death for espionage for Germany; hanging judgment was carried out.

At the beginning we learn the details of the colonel’s life since 1900. Job changes, different  women, not very successful attempts to make a career in politics. Mackiewicz shows more and more situations and details that will later be used in the trial against Miasojedow. This part of the novel can be described in a sense as a thriller or a sensational or spy novel.

The second part of the book presents the fate of Miasojedov’s wife. It begins with the trial of a colonel, in which she is initially acquitted, then sentenced to death, and finally found herself in exile in the Altai Krai in Siberia. The novel presents the fate of a woman whose only “crime” was loyalty and love towards her unloving husband, for which the name of ‘the wife of a traitor’ haunted her for the rest of her life.

The idea of writing a novel, as Mackiewicz tells, was created by looking through old newspapers. The author came across the 1915 newspaper “The Times” on an article about the case of a Russian colonel named Miasojedov, accused of espionage for Germany, which was to contribute to Russian calamities in East Prussia. The writer says that the article awakened him in various memories of circumstances and people – some of whom he came across in his youth personally. These memories encouraged him to take a closer look at the case which reminds him of the Dreyfus case, which was described in many books, while the same case of Miasojed was not yet described in detail.