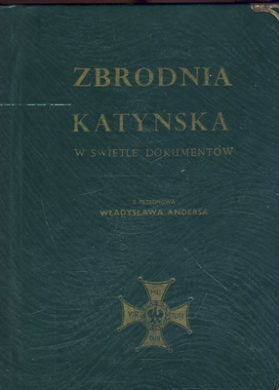 This is a comprehensive report on the Katyn massacre. In May 1943, Germans discovered in Katyn the graves of Polish officers murdered by the Soviets. Józef Mackiewicz went there as an observer of exhumation of the corpse at the invitation of Germany and with the consent of the Polish underground authorities. In 1948, while already in exile, Mackiewicz participated in the preparation of a report by the Polish government in exile in London.

The report contains documents, testimonies and photographs related to the murder of Polish prisoners of war from the camps in Kozielsko, Starobielsk and Ostaszków by officers of the Soviet NKVD on the orders of the highest authorities of the Soviet Union. The book also includes an analysis of the fake Soviet report, the so-called Burdenka’s commission pointing to false data contained there.

The book was repeatedly reissued in the West. During the Polish People’s Republic (PRL), its dissemination in Poland was prohibited by censorship, which is why until 1990, when the system transformation took place, it appeared in the country as an underground publishing house. For many years, the book did not mention information about Józef Mackiewicz’s decisive contribution to its development.