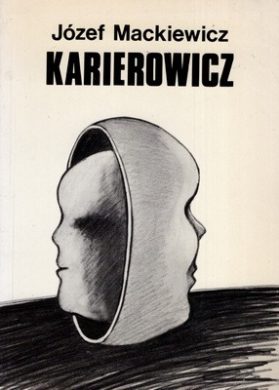 It is a novel set in the nameless town of the borderland on the river, more precisely in the hospital and in the circle of its affairs, at the beginning during the Polish-Bolshevik war in 1919 and then six years later, when the main character Leszek, a volunteer from that war,  returns to the town as a forester.

We can say that “Karierowicz” is a kind of psychological novel. The author has no intention of judging his characters in advance, he does not give ready-made assessments – he leaves them to the reader. Initially, it may not leave a great impression, only after reading, when we start thinking about it, we can feel how deep sense it makes.

As Maria Danilewiczowa pointed out in No. 10 of “Wiadomości” (‘News’) in 1956, “This is a novel about the war generation, out of school bench to ranks, brutally learning life from older companions in conditions that derail. It could also be said that this is a realistic novel – in the spirit of the so-called “critical” and “pessimistic” realism, which shows evil but cannot point to the medicine for it. “