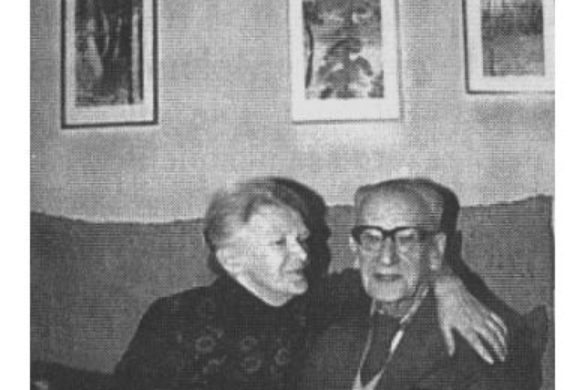 The personality of Józef Mackiewicz, his turbulent political life, controversial work, as well as the writer’s restless private life raises many questions and arouses emotions to this day. In 1924, at the age of 22, Józef Mackiewicz got married. The writer’s first wife was Antonina Kopańska,…

The personality of Józef Mackiewicz, his turbulent political life, controversial work, as well as the writer’s restless private life raises many questions and arouses emotions to this day.

In 1924, at the age of 22, Józef Mackiewicz got married. The writer’s first wife was Antonina Kopańska, a teacher. A daughter Helena was born, but the relationship was unsuccessful and fell apart after a few years.

Then the writer in the editorial office of the “Word” newspaper meets Wanda Żyłowska. Wanda worked here as a proofreader, Józef was a journalist. The acquaintance grew into love, the fruit of which was the daughter Idalia. Unfortunately, during the war Wanda Żyłowska died and the writer was left alone again.

In the editorial office of the “Word” newspaper, the writer also meets Barbara Toporska, who became his faithful companion until the end of his life. In 1939 they got married (in the Orthodox church), and after the death of his first wife, Antonina Kopańska (1973), Barbara and Józef married also in the Catholic church. They bought a house in Czarny Bór and lived there for almost 10 years until they escaped from the Red Army in 1944.

Although the last relationship was childless, the couple had a strong affection and a lasting bond. They met when the writer struggled with an internal crisis, but with the arrival of Barbara and her support, the writer came to life. He began to travel around the Borderlands and wrote a lot. The controversial activity of the writer caused him many problems, but Barbara always stood by her husband’s side, defended him, supported and helped him. Together they survived the Second World War, together they fled to the West from the Soviets. Then she supported him in the emigration misery, she dealt with letters with Józef’s daughters, with her money she not only bought a house in Czarny Bór, but also when moving to London, while Józef Mackiewicz tried to become a journalist, his wife earned for their living by physical labor, she washed, cooked, read and edited her husband’s texts. They were also faced with a difficult period of poverty in Munich, where they both lived until their deaths, earning for a living from the few fees for publications.

Instead of writing or painting, she was a secretary to her husband. She renounced her own comforts and fame, devoting herself to him so that he could create.

She was with him until the end, she did not want to die first and leave her husband. Józef Mackiewicz died on January 31, 1985, and Barbara left after five months. Her ashes were buried next to her husband’s ashes in the Polish church of St. Andrzej Bobola in London with the following inscription: “Śp. Barbara Toporska Mackiewiczowa 1913-1985. Her ashes are to be always next to her husband. On the other hand, on the board of the place with the urn of Józef Mackiewicz, there are words by his wife Barbara: “Śp. Józef Mackiewicz 1902-1985. The writer. His ashes are to be transferred only to Vilnius, to Rossa cemetery”. “And they are to be there until his home town is freed from the communist regime,” Barbara said in her will.