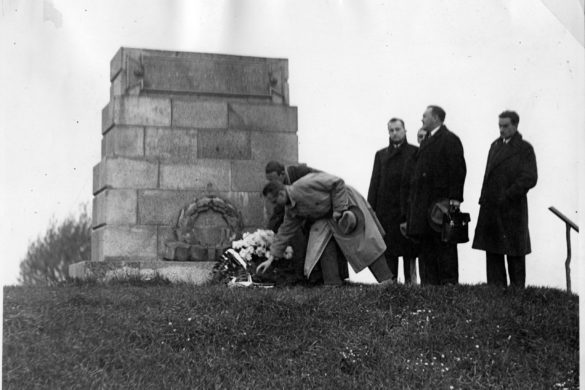 At the turn of 1942 and 1943, Józef Mackiewicz was sentenced to death by the verdict of the Home Army court in Vilnius. The sentence was to be carried out by the writer Sergiusz Piasecki, but he did not do so because he doubted the correctness of Mackiewicz’s…

At the turn of 1942 and 1943, Józef Mackiewicz was sentenced to death by the verdict of the Home Army court in Vilnius. The sentence was to be carried out by the writer Sergiusz Piasecki, but he did not do so because he doubted the correctness of Mackiewicz’s accusation. On the other hand, the commandant of the Vilnius District of the Home Army, Lieutenant Colonel Aleksander Krzyżanowski-Wilk, under pressure from his associates, suspended the execution of the sentence almost at the last moment, just before the execution. The issue of the judgment, its circumstances and the exact date remain unclear to this day.

The writer himself explains the matter as follows: “Immediately after the publication of my book, a furious campaign against me began, and as a result of this campaign, a note in “Niepodległość” entitled “The Three Gentlemen of Goniec” appeared. The article accused Józef Mackiewicz, Czesław Ancerewicz and Eugeniusz Kotlarewski of cooperation with the occupant, it also indicated the cooperation of Mackiewicz with Ancerewicz, who edited “Goniec Codzienny” and allegedly profited from it.

The attack on Mackiewicz was preceded by the following sequence of events: during the occupation of Vilnius by the German army (1941), Józef Mackiewicz and Wacław Studnicki received an offer to edit a German periodical in Polish. They both firmly refuse. Czesław Ancerewicz became the editor of the magazine. Meanwhile, Mackiewicz published several anti-Soviet articles in “Goniec Codzienny”, in which he wrote about the Soviet occupation of Lithuania. Not the content itself, but the place of publication, became a pretext for accusing Mackiewicz of collaborating with Germany and for issuing the death sentence on Mackiewicz by the Special Court of the Home Army.

After the note in “Niepodległość” about editing “Goniec Codzienny”, Ancerewicz did not escape the death sentence, he was shot on March 16, 1943 in the church of St. Catherine. Eugeniusz Kotlarewski fled to Warsaw, where he was shot by the underground or murdered by the Gestapo. Soon after that, the Executive received the death sentence against Mackiewicz, who was to be executed by Sergiusz Piasecki, who refused to shoot Mackiewicz because he had many doubts about the accusations. He stole from Andruszkiewicz’s desk the formal appeal of the death sentence on Mackiewicz and other underground documents, including Mackiewicz’s report from Katyn. At the last moment, just before the execution, under pressure from his associates, Col. Aleksander Krzyżanowski-Wilk suspended the execution of the sentence.

Another reason for the sentence on Mackiewicz was the departure in May 1943, at the invitation of the Germans and with the consent of the Vilnius Home Army, to Katyń, where the writer witnessed the exhumation of the graves of Polish soldiers. After his return, he submitted two reports to the authorities of the Home Army (in Warsaw and Vilnius – both were lost). An interview with Mackiewicz was published in “Goniec Codzienny”. “I saw it with my own eyes”, in which he unequivocally claims that the crime was committed by the Bolsheviks. Besides, after returning from Katyń, Mackiewicz wrote a book entitled “Katyń: a crime without trial and punishment”, in which he also emphasized that only the Soviets are responsible for the Katyń massacre.

The case of Mackiewicz is still unclear to this day and the accusations against him have not been proven. W. Bolecki, who has studied the “Mackiewicz case” in detail, believes that all this campaign and sentence are the result of Soviet intrigues.