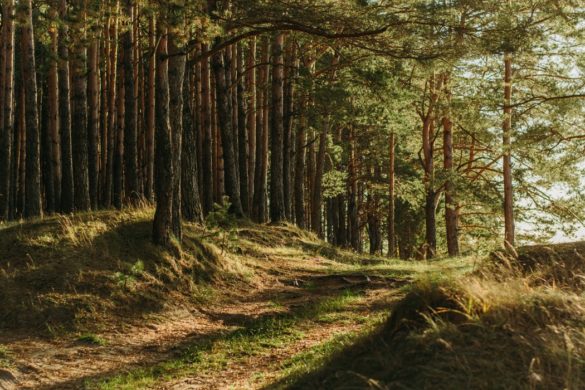 On September 2, 1945, in the weekly “Orzeł Biały”, the magazine of the 2nd Corps (the higher union of the tactical Polish Armed Forces in 1943-1947), Józef Mackiewicz’s text “Ponary-base” was published. It was one of the first literary texts about the Nazi regime in 1941-1944 and about…

On September 2, 1945, in the weekly “Orzeł Biały”, the magazine of the 2nd Corps (the higher union of the tactical Polish Armed Forces in 1943-1947), Józef Mackiewicz’s text “Ponary-base” was published. It was one of the first literary texts about the Nazi regime in 1941-1944 and about the mass executions carried out in Ponary near Vilnius.

Remembering Ponary, Józef Mackiewicz initially associates this place with something beautiful: “Ponary mountains have been known for a long time. They are known for their picturesqueness, for the height of their pines, for the poem by Mickiewicz, for the battle fought here in 1831 between the Polish army and the Russian tsarist guard”. The picturesque description of this place continues: “There, near the railway station, a garden city was built, in our name it is an ordinary summer resort, but it can be a health resort, (…) it smells of resin all year round, and in autumn it smells of mushrooms and a cold, powerful wind that blows freshness from all parts of the country”. Mackiewicz, who loved the Land of Vilnius with all his heart, expresses his attachment to this place: “Whoever loved his homeland near Vilnius, obviously loved Ponary”.

Later in the text, the idyllic mood fades away: “It is not known when and from whom it happened, that this area was called BASE. (…) In 1940, in Ponary, the Bolsheviks set up some unnecessary state enterprise in Ponary, on a mindlessly sawn piece of forest and land taken away from the population, surrounding large squares, with their custom, with a strong fence and barbed wire. The Germans took advantage of the leveled area in 1941 and used it for the place of execution, setting up one of the largest Jewish slaughterhouses in Europe”.

It happened that Mackiewicz lived near the site of these tragic events. He writes in his essay: “I had the misfortune to live, admittedly on the second railroad crossing from Vilnius, but only eight kilometers from Ponary. At first, in a country as saturated with war and war as ours, little attention was paid to arrows, which, no matter where they came from, were already entangled in the normal rustle of pine trees, almost like the rhythm of the familiar rain, beating against a window in autumn. They echoed from these hills, het, into a circle of many kilometers, single shots, short, choppy, dense, sometimes lasting many hours, or alternately rattling bursts of machine guns ”.

Life of the Mackiewicz family, as well as of many other families, was bursting with the awareness of terrible events which they were unable to change: “My wife even started to close the loops whenever an echo ran from there. In summer we couldn’t eat on the porch when the shooting started in Ponary. Not out of respect for someone else’s death, but just like that, the potatoes with milk didn’t want to get down their throat. It seemed as if the whole area was gobbling with blood.”

In the text, we learn about the circumstances of the tragic events. Józef Mackiewicz became an accidental witness of the execution of Jews after he had cycled to Ponary to visit an acquaintance who had missed his meeting in Vilnius. While on a bicycle ride in Ponary, he met a drunk Estonian sentry from the national SS troops formed by the Germans, who only waved his hand to go on. Then he was stopped by a German in the uniform of a Gestapo who advised him to hurry up. A few meters away, he runs into a “very long train stuffed with Jews.” He realized that something was starting to happen when “there was a sound of metal locks and their policemen’s wild, menacing roar in response to the roar of the people trapped on the train.” Mackiewicz managed to hide under the eaves of the station building. The writer describes his shock: “I hold the bicycle tightly and subconsciously I feel that in the face of what will happen, the most terrible that must happen, this bicycle, those railwaymen to whom I have clung to, will stand still, this is the only right to continue my life.. We huddled together behind this bike as if we were behind a rampart, because there was nowhere to run”.

“The first shot was as follows: a Jew was just getting out with his back through the narrow window, lowered his legs and just put his seat out, and the policeman jumped up and shot him in the ass from a distance of one step. (…) A ghastly scream and lamentation and howling and crying arose, and arrows flew from all sides at once, bullets whistled, fell with the crunch of broken bones and cracked skulls, the blows of butts.

-Someone was jumping over the ditch and hit between the shoulder blades, fell into it like a dark bird with its arms outstretched like wings.

– Someone was crawling on all fours between the rails … Some old Jew lifted his chin and stretched his hands to the sky, as in the biblical picture, and suddenly his head splattered blood and pieces of his brain … (…) Quietly, a nine-year-old boy was lying across the rail and though if he screamed, but not to hear his voice, it was obvious that he was already dead, because he was not trembling.

– There was a tumult under the wheels of the carriages, because there the majority sought help and there they were poured the most with machine guns, like water jets, a dark mass of tattered figures.

– (…) a young Jewish woman, her fawn hair is blowing, her face twisted in inhuman fear, her ear, a comb hangs on a strand, she grabs her daughter… I can’t look. The air is torn by such a terrible clatter of murdered people, and yet it can be distinguished by children’s voices a few tones higher, such as the crying-howling of a cat at night. No letter invented by people will repeat this!… The Jewish woman falls first on her face, then she shrugs on her back and, waving her hand in the air, searches for the hand of her child. I can’t hear, but I can see from the position of the little girl’s mouth that she calls out: “mame!…”.

Not all Jews left the train. Most Jews “were chained with fear, paralyzed in their movements, with this spark, probably not so much hope, but rather madness, that – it was a misunderstanding that they had been officially told that “they were going to work in “Koszedar”.

Today it is recognized that during World War II, in the years 1941-1944, about 100,000 people died in Ponary at the hands of SS and German police units supported by voluntary Lithuanian units (Ypatingasis būrys). The victims were brought by trains or trucks, shot and buried en masse in huge pits. Later, attempts were made to cover up the traces of the crime by burning the bodies of the murdered. Therefore, today it is not known how many victims were killed by the Ponarian forests. Among the victims, Jews from Vilnius and eastern Lithuania ranged from 56,000 to 70,000. From several thousand to 20,000 victims were also Poles, mainly Vilnius intelligentsia, soldiers of the Home Army, scouts, school youth and clergy.