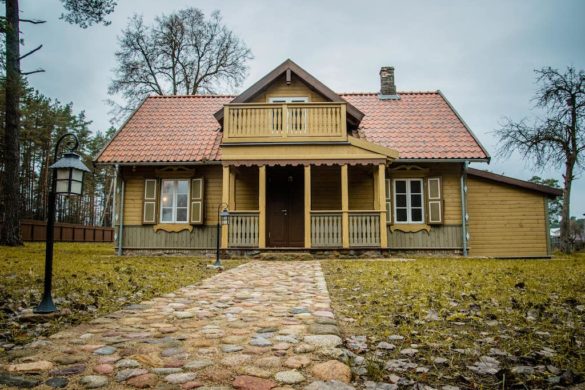 Józef Mackiewicz was born in Saint Petersburg, but when little Józio was five years old, in 1907 his parents Antoni and Maria Mackiewicz, together with their children Stanisław, Seweryn and Józef, moved to Vilnius. They decided to move because the humid climate on the Neva was not conducive…

Józef Mackiewicz was born in Saint Petersburg, but when little Józio was five years old, in 1907 his parents Antoni and Maria Mackiewicz, together with their children Stanisław, Seweryn and Józef, moved to Vilnius. They decided to move because the humid climate on the Neva was not conducive to Józio, the boy still suffered from an upper respiratory tract infection, and for Antoni Mackiewicz it was an excuse to return to his hometown. The Mackiewicz family bought a house in the so-called Banking Colony (Banking Colony, also known as Montwiłłowska, it is a quarter of several streets in the Vilnius district of Rossa, where at the end of the 19th century the philanthropist and social activist Józef Montwiłł built residential houses for bank employees). They moved to Witebska street 1 (the corner of Białostocka and Witebska streets).

In Vilnius, Józef and his brother Stanisław attend the Russian classical gymnasium Winogradowa. The gymnasium was located opposite the church of St. Catherine (after the outbreak of the Russo-German war in 1914, the school was evacuated to Moscow). Brothers  received a lot of knowledge about Russian culture and literature at school, especially Józef, who later in his works will constantly point out the differences between what is Russian and what is Soviet.

Their mother, Maria Mackiewiczowa née Pietraszkiewicz, who taught the children literature and art, had a great influence on the upbringing of the children and at the same time she took the children to the Missionary Church (Subocz Street 28) every Sunday.

The death of Józef’s father and the outbreak of war in 1914 led the Mackiewicz family to a difficult financial situation. The mother decides to sell the house on Witebska Street in order to have financial resources to educate her sons. She herself moved to Dormitory at ul. Zamkowa 24. She lived there until her death in 1932. Both of Józef’s parents were buried in Ross’s Cemetery.

In 1915, when the Germans occupied Vilnius, there was an opportunity to recreate Polish education. Polish schools were established, including the Polish gymnasium of Król Zygmunt August, then located at Wileńska Street 10, where brothers Józef and Stanisław continued their education. Józef, being a 6th grade student, at the age of 17, volunteered in the Polish-Bolshevik war. After the war, he graduated from high school in Vilnius and in 1921 he left for Warsaw to begin biological studies at the University of Warsaw, which he would never complete.

In 1923, Józef returned to Vilnius and started working in the “Word” newspaper, edited by his older brother Stanisław. Initially, the editorial office was located at Mickiewicz Street, then at the corner of Królewska and Zamkowa (currently at the corner of B. Radziwiłłówna and Zamkowa). Within the walls of the editorial office, he met his future wife Barbara Toporska, with whom he bought a house in Czarny Bór. They lived there for almost 10 years until they left their homeland forever in 1944.

It is impossible not to mention the Rudnicki café, which was the favorite place of Vilnius artists. Józef was also often seen there. The cafe was located in the very center of the city, on the corner of A. Mickiewicz and Arsenalska Streets, opposite the Cathedral (currently at Gediminas Avenue 1).

The figure of Józef Mackiewicz was for a long time doomed to be forgotten, until in 2017 in the former Banking Colony in Rossa (Witebska Street 1), where the Mackiewicz family lived, a commemorative plaque was unveiled with the inscription: writers and journalists Józef Mackiewicz and Stanisław Cat – Mackiewicz ”. A commemorative stone was also unveiled in Czarny Bór, by the Mackiewicz family house. Currently, the house in Czarny Bór is being restored and furnished and soon the writer’s museum will start working there.