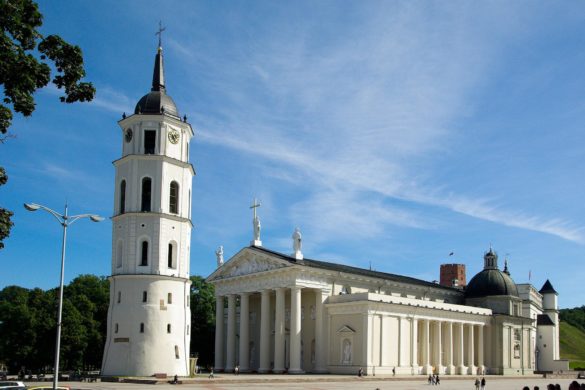 Historically, it so happened that in different periods Vilnius was under different powers: German, Soviet, Polish, Lithuanian. Today, in 2022, you can still hear from the lips of Poles that “Vilnius is ours”, i.e. Polish. To which the Lithuanians will reply that Vilnius has always been Lithuanian, periodically…

Historically, it so happened that in different periods Vilnius was under different powers: German, Soviet, Polish, Lithuanian. Today, in 2022, you can still hear from the lips of Poles that “Vilnius is ours”, i.e. Polish. To which the Lithuanians will reply that Vilnius has always been Lithuanian, periodically occupied by more and more other countries. Józef Mackiewicz also referred to the issue of the “identity” of Vilnius in his time.

Józef Mackiewicz referred to the history of Vilnius, which was periodically occupied by various states. Paradoxically, in a multicultural city there were always groups of people who were happy to welcome newcomers. This was the case when Germans, Poles or Soviets entered Vilnius. Nevertheless, the people of Vilnius rejoiced the most when in October 1939 the Lithuanians entered the city. There was joy and relief that the Soviet rule marked by terror, arrests and looting was over.

“The conditions developed so unexpectedly that it seems that in the history of Vilnius there was a moment of unprecedented importance, which had not happened before. A moment worth emphasizing as the fruit of historical fate. A moment so characteristic that it would be a pity to pass over it, considering it a manifestation of political banality. Because this is not about a manifestation, a patriotic statement, not about fanfaronade, but about the fact: so joyfully and uniformly by all residents, regardless of whether they were Poles or Lithuanians – no other army has been greeted like today… the Lithuanian army will be welcomed in Vilnius,” wrote Józef Mackiewicz in the daily “Lietuvos Žinios”, published in October 1939 in Kaunas.

Of course, Poles from Vilnius then divided into two groups: those who were happy that the capital of Lithuania once again belonged to the country, while another group preferred that it was a Polish city. Józef Mackiewicz notes that one could get the impression that the first group of Poles who wanted Vilnius in Lithuania were ashamed to say what they really thought.

“And also because some smiling lips said: “We are so happy, perhaps the most! But… maybe it’s not appropriate to show it?” This thought with a question mark, these words: “it is not appropriate”, seem to me as if an echo of this internal and foreign policy, which took as its basis not a real, but a fictitious path that led to the destruction of the Republic of Poland. Only real values matter. Such a real value for us is the transfer of Vilnius from the USSR into the hands of the Republic of Lithuania,” described Mackiewicz.

According to Mackiewicz, if Vilnius had still, even formally, belonged to Poland at the beginning of World War II, a conflict between the two countries could not have been avoided. On the other hand, in future relations between the two countries, the question of Vilnius should not affect the success of such relations. The publicist believed that these relations must be good and must develop on this level, while the then authorities should not make any major and key mistakes that could change the course of the history of Polish-Lithuanian relations.

“In any case, the fatal mistake of Marshal Piłsudski of creating a fictitious great state (great power), where geopolitical conditions call for real statehood, must not be repeated,” the columnist believed.

Although Mackiewicz did not explicitly answer the question “Whose Vilnius had to be at the beginning of World War II?” Nevertheless, his article allows us to clearly define his attitude. As an inhabitant of Vilnius, a patriot of his country, J. Mackiewicz, along with others, was probably glad that the Lithuanian army entered Vilnius again.

J. Mackiewicz stressed many times that his thoughts were not directed against Poland. They were not intended to cast any shadow on Polish-Lithuanian relations or decisions taken by the Lithuanian neighbor. Only the issue of Vilnius, which has been and remains controversial for years, did not give peace to his Lithuanian heart and spirit. Although such an unpopular opinion could have cost him a lot, he dared to say out loud that no one met the “new hosts” like the people of Vilnius met the Lithuanian army.

Based on an article by J. Mackiewicz in the newspaper “Lietuvos Žinios” from October 1939, Kaunas.