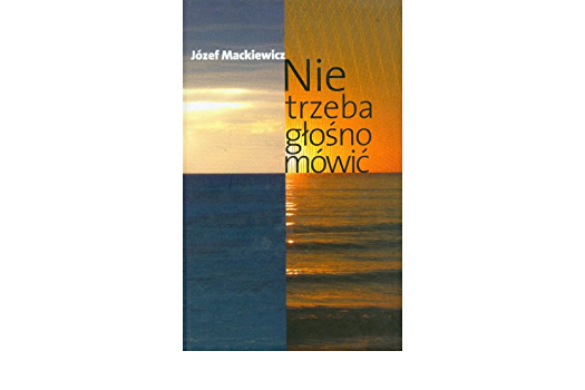 “No Need To Speak Out Loud”

Józef Mackiewicz’s novel “No Need To Speak Out Loud” was first published in 1969. The book tells the story of the inhabitants of the Vilnius Region in the years 1941-1945. Mackiewicz not only presents historical elements, but also describes the human tragedies of the occupation, which must not…

Józef Mackiewicz’s novel “No Need To Speak Out Loud” was first published in 1969. The book tells the story of the inhabitants of the Vilnius Region in the years 1941-1945. Mackiewicz not only presents historical elements, but also describes the human tragedies of the occupation, which must not be forgotten, but also sometimes not worth speaking out loud.

“On the one hand, “No Need To Speak Out Loud” is something like a World War II calendar, a precisely recreated course of events, with a lot of names, quotes from documents, dates or even the number of tanks and mines used by the German and Soviet armies. The plot moves chronologically along with the battlefields; there is the siege of Leningrad and Stalingrad, the Battle of Kursk, the Tehran conference, the Warsaw Uprising and many other key issues. The author describes the Moscow trainings of Soviet paratroopers, their subsequent drops and their fate in Belarusian forests, villages lost in forests fighting the communist guerrillas or the shocking massacre of Jews in Ponary near Vilnius. Much space is devoted to the German policy towards eastern territories – Poland, Lithuania, Ukraine and Belarus. From the seemingly coherent stance emerge fighting, and even hostile, points of view of the Nazi leaders (Mackiewicz describes three main ideological camps). In this context, the writer poses the most important questions for Poland at the time: how to behave in the face of the Germans losing the war and the upcoming (second already) Soviet occupation? Should you cooperate with Germany against the Soviets? What position to take towards the Lithuanian minority demanding Vilnius? The rations are divided into several dozen characters and supported by factual arguments. And here comes the other side of the novel, the one depicting ordinary human life under war conditions, with black trade, information chaos and animal fear in the streets,” writes Kasper Linge in his review.

The main protagonist of the book is the population living in the eastern territories of the Nemunas, Neris and the Dvina, who at the beginning of the war could have hoped that the Bolshevik regime would be suppressed by Germany. Hitler, however, wants to have a German colony in the occupied territories. A real slaughter begins in the occupied territories, in which everyone begins to fight everyone, no matter who is the real enemy or who is the ally. Neither nationality nor profession counts. The Germans, cooperating with the Lithuanians, start murdering Jews, Polish partisans fight against the German and Lithuanian occupiers, while the Soviets murder everyone who opposed the Soviet authorities, regardless of their nationality.

Mackiewicz quietly, practically in a whisper, took up the topic of the effects that the Soviet-Nazi clash had brought to various nations. Poland, hoping to defeat the Nazis, sided with the Soviet side, while other nations, such as Lithuanians, Belarusians, Georgians, and Tatars, could not afford it for various reasons. In this way, an imperceptible dividing line arises between these nations, which is consequently the fruit of tragic human stories and experiences.

Mackiewicz takes up a number of themes that are not allowed to be talked about aloud, and in the book he condemns some of the activities of Poland at that time. The story is described here a bit differently than we are used to hearing. This is not a story we grew up on and taught during school lessons. It is a painful story, sometimes not even digestible by the reader.

Nevertheless, if such a story, told through the mouth of Mackiewicz, is to take place in the record – it should be compared to what we know and refer to other historical sources.