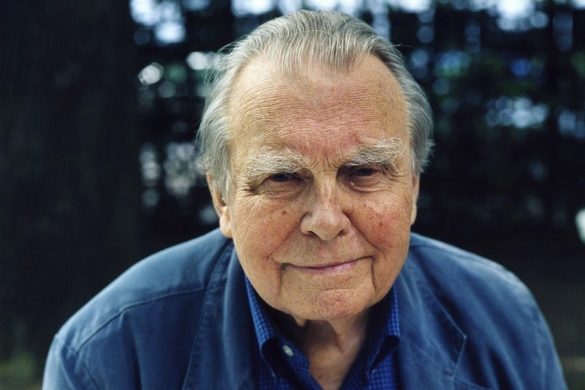 Józef Mackiewicz’s work has gained many fans of his writing skills, as well as his attitude based on the search for truth and its disclosure. Czesław Miłosz was one of the admirers of Mackiewicz’s work and personality. One of the most important Polish Nobel Prize winners has repeatedly…

Józef Mackiewicz’s work has gained many fans of his writing skills, as well as his attitude based on the search for truth and its disclosure. Czesław Miłosz was one of the admirers of Mackiewicz’s work and personality. One of the most important Polish Nobel Prize winners has repeatedly paid tribute to Mackiewicz’s talent.

The Nobel Prize winner devoted more than one text to the figure and work of Mackiewicz, such as “The Voice of the Faithful Reader” or “The End of the Great Duchy”. The acquaintance of these two writers began when Czesław Miłosz worked for several months with Józef Mackiewicz in “Gazeta Codzienna”.

“My closer acquaintance with Mackiewicz took place in 1940, when Juozas Keliuotis, the editor of Naujoji Romuva, helped me get to Vilnius, Lithuania, which I treated as a transitional stage. Mackiewicz edited one of the two Polish daily newspapers in Vilnius, published at that time, “Gazeta Codzienna”. The deputy editor was my friend from Żagary, Teodor Bujnicki. I became a collaborator of this journal, like many writers, locals and refugees, incl. Światopełk Karpiński and Janusz Minkiewicz. Polemicizing after many years with my essay about Bujnicki, Mackiewicz (“On a certain last attempt and shot Bujnicki”, 1954) does not agree with my definition of his program as the defense of the “Polish canton” within Lithuania. And undoubtedly, neither any “Polish canton”, neither Poland nor Lithuania could satisfy this tombstone of the Grand Duchy, since he wanted to follow in the footsteps of Ludwik Abramowicz. In practice, however, the program of “Gazeta Codzienna” was reduced to this and it differed from “Kurier Wileński”, which became the voice of Polish orthodoxy, professed by the majority of Polish Vilnius: for it, Vilnius’ affiliation with Lithuania was simply a Lithuanian occupation” – wrote Miłosz in “The End of the Great Duchy”, published in “Kultura” in 1989.

Both gentlemen shared similar political and philosophical views, although at first glance it does not seem so. The articles written by the poet about Mackiewicz were defensive in nature. Miłosz wanted to debunk all myths and clear Józef’s name of any slander about the alleged collaboration with fascist Germany. The reasons for the suspicions were mainly: Mackiewicz’s interview for “Goniec Codzienny” and a report on the exhumation of the bodies of Polish officers from Katyn. Accusing him of such shameful plays was associated with the loss of authority and a taint on reputation, but Miłosz not only disagreed with it – he also defended the writer. As he himself wrote: “A strange company took part in the campaign against Mackiewicz, because there were patriots and hidden agents of the Katyn massacre. It was in the best interest of the latter to declare the witness a fascist and collaborator. “

“Józef Mackiewicz saw the Katyn graves and wrote what he saw. He also accidentally witnessed the murder of Jews by the Germans in Ponary and also left a factual report. And as long as Polish literature exists, these two records of the horror of the twentieth century should be constantly recalled in order to provide a measure when literature is too distant from reality ”- explained Miłosz.

Miłosz did not deny the fact that several of Mackiewicz’s articles appeared in “Goniec” and it was a clear oversight on the part of the journalist. However, the Nobel Prize winner justified him that it was a matter of impulse after the end of the “Soviet nightmare” in the Vilnius region and the desire to make people aware of the dangers posed by communist ideology.

Czesław Miłosz was also a huge fan of Mackiewicz’s novels. In “Kultura” in 1955 he wrote and published his review of “The road to Nowhere” under the title “Please respect the Vilnius citizen”. This was in addition to an existing review as he concluded that “this strange book deserves more”. His delight can be shortened in simple sentences from the same text: “In this novel he shows an amazing gift of operating with the realities of everyday life of little people. None of the prose writers residing in Poland can create characters with just a few strokes of the pen, and without psychologisms, almost without description, showing a gesture, a sigh, a spit”. The main accusation against this novel was the lack of patriotism, he accused it of, among others Paweł Jasienica – Polish historian and essayist. To which Miłosz replied: “It is hard to find greater patriotism there in the Vilnius region what is more well-established than Mackiewicz’s”. Adding at the same time: “The road to nowhere” is only on the surface a political novel. (…) Whoever does not see the philosophical knot in this novel hurts Mackiewicz. “

Mackiewicz also had great affection for the Polish Nobel laureate. He wrote about him: “I have always considered him to be one of the most intelligent people I have ever come into contact with in my life and that is why I was glad (…) that he was first and foremost a fierce anti-Bolshevik, and he expressed, as far as I recall, the same view that Bolshevism is the greatest danger, even greater than Germany, even Nazi!”. On the other hand, he also wrote that Miłosz could be an even greater talent, “if he could free himself from the complex of the intellectual environment.”