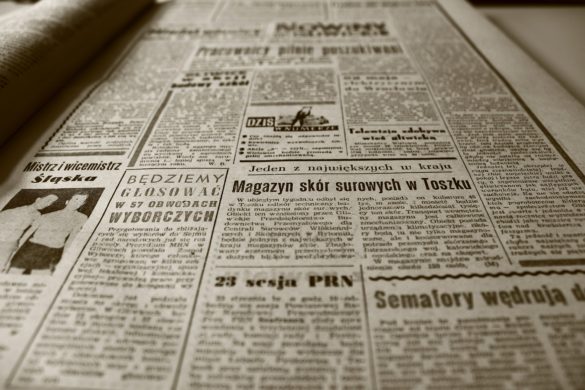 Józef Mackiewicz on the pages of “Słowo”

The first issue of the Vilnius “Słowo” (‘Word’) was published on August 1, 1922. The magazine was established on the initiative of a group of wealthy landed gentry of the former Grand Duchy of Lithuania. Józef Mackiewicz’s brother, Stanisław, served as an editor until September 18,…

The first issue of the Vilnius “Słowo” (‘Word’) was published on August 1, 1922. The magazine was established on the initiative of a group of wealthy landed gentry of the former Grand Duchy of Lithuania.

Józef Mackiewicz’s brother, Stanisław, served as an editor until September 18, 1939. It was then that the last issue of the magazine was published in Vilnius. From February 1923, he was also its publisher, and in the last years before the war, he also became its formal owner.

During the 17 years of the existence of Vilnius “Słowo“, the magazine regularly published texts by famous authors. Among them were: Walerian Charkiewicz, Paweł Jasienica, Czesław Miłosz, Jerzy Wyszomirski, Józef Mackiewicz and many others.

In 1922, Stanisław’s brother Józef Mackiewicz started working in the daily “Słowo“. He published reportages, articles, columns and short stories there. On September 2, 1922, the first text by Józef Mackiewicz appeared on the pages of this magazine. The salary he got in the “Słowo” was his only source of income. He was poor, so initially he also helped as a technical worker, he tried to carry out every order. The work in this magazine also gave him the opportunity to meet Barbara Toporska – his future wife, who was a journalist of “Słowo“.

It was not until 1924 that he began to systematically publish his articles. These were short notes on political events around the world and, above all, information on Lithuanian affairs and the development of communism in the USSR.

He signed his texts as “m.” or “j.m.” (later usually as “J.M.”), so to this day researchers have quite a problem with determining their authorship. In 1928, he began to publish larger reports or even introductory articles in “Słowo“. The years 1936-1939 were the most prolific for Mackiewicz as a journalist. In 1936, “Słowo” published his collection of short stories called “The 16th, between 3 and 7 o’clock”, but Mackiewicz gained nationwide fame in 1938 with his “Bunt rojstów” – a collection of reports previously published in “Słowo” – awarded by “Wiadomości Literackie”.

Józef Mackiewicz opposed Lithuanian nationalism, referring to the concept of the multinational Grand Duchy of Lithuania. He also fought against anti-Semitism, although some accused him of it on the basis of his pre-war texts. However, he criticized the ties between Jewish organizations and the communist movement, treating it as anti-state activity. The frequency of journalistic texts negatively evaluating the activities of the state administration in Kresy increased in the late 1930s.

From 1939, he devoted his writing to political topics; he opposed the handing over of Gdańsk to the Germans, he also dealt with the security of the Baltic states and the possible aggression of the Soviets. On September 18, 1939, the last issue of “Słowo” was published.

Working in “Słowo” for Józef Mackiewicz was a good start at the beginning of his journey in journalism, which he later continued in other magazines.