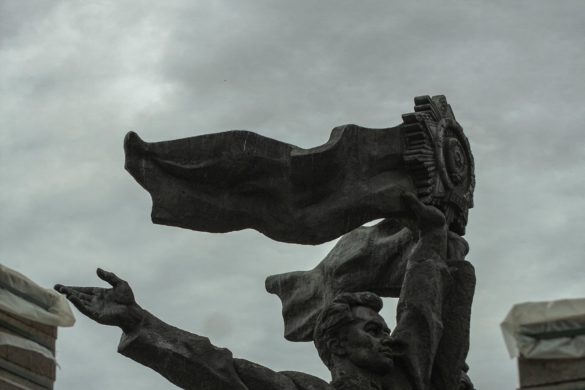 A constant subject of Józef Mackiewicz’s criticism was the so-called “political realism” (or polyrealism), which, according to the writer, consisted of coming to terms with the communist system and looking for ways of coexisting with it. Mackiewicz believed that communism is an “absolute evil” that must be destroyed.

A constant subject of Józef Mackiewicz’s criticism was the so-called “political realism” (or polyrealism), which, according to the writer, consisted of coming to terms with the communist system and looking for ways of coexisting with it. Mackiewicz believed that communism is an “absolute evil” that must be destroyed. As he wrote in the book “The Victory of Provocation”: “PRL -“Polish People’s Republic” (Polska Rzeczpospolita Ludowa) is neither “Polish”, nor “Rzeczpospolita”, nor “people’s”. It is a member of the Soviet bloc and a branch of international communism.”

In the book by Jerzy Malewski, “Ptasznik z Wilna. About Józef Mackiewicz”, Mackiewicz’s attitude towards “polyrealists” is presented. For “political realists” in the game against communism, only the national interest of their country counts. According to Mackiewicz, this position suited the communists exceptionally, as the only real threat to them was international solidarity. Wherever the “national interest” prevailed, sooner or later the communists would triumph. Mackiewicz believed that the transfer of the 19th-century Realpolitik (a policy once applied to Russia, based on the calculation of national strength and interests, rejecting moral and ethical factors) to the USSR was completely unrealistic. One cannot fight communism under the banner of nationality, but under the idea of ​​anti-communism on a global scale.

His criticism of “polyrealism” had also other justifications. He criticized the supporters of this concept for repeating the stereotype: Poland is neighbors with Russia and must get along with it at all costs. Mackiewicz emphasized that it is not Poland that neighbors Russia, but the PRL and the USSR. More importantly, Poland is not a neighbor of Russia – Poles are neighbors with the Ukrainian, Belarusian and Lithuanian nations and only these nations have borders with Russia.

Mackiewicz argued many times that the guideline of Polish policy cannot be at stake for reaching an agreement with the USSR, but at stake for supporting the independence aspirations of those nations that lie within the belt separating ethnically Polish territories from ethnic Russia. Mackiewicz’s attitude towards the Polish People’s Republic also differed from “polyrealists”, which the writer did not consider as an extension of Polish statehood, but as a result of the Bolshevik revolution.

What irritated him most in Polish realism was the acceptance of the consequences of the Yalta Agreement. A characteristic example was the matter of borders. Polyrealists believed that Vilnius and Lviv were taken from Poland, but at the same time they defended new borders in the west. Mackiewicz saw this as a symptom of a mental split. If the borders in the West are accepted, then Yalta is accepted. If Yalta is accepted, the expulsion of Poles from Vilnius and Lviv is accepted. And also the Soviet occupation of the Baltic states. So he was irritated that the Polish realists, in the name of the present national interest, had so easily accepted the post-Yalta shape of Europe. The thesis that Yalta brought Poland benefits in the form of western territories was unacceptable to him. His homeland was in the East, in the territory of the former Grand Duchy of Lithuania.

As Mackiewicz noted, “polyrealists” considered the Polish People’s Republic to be their “own” state, which had “better” borders than the Second Polish Republic, and stronger than Independent Poland. They also believed that the only thing they had in common with the communists was the conviction that the Polish People’s Republic was the highest good that must be guarded, hence all those who questioned it were enemies of the Polish nation. Such views of “polyrealists” are ironically called by Mackiewicz “love for your neighbor is greater than love for yourself…”.