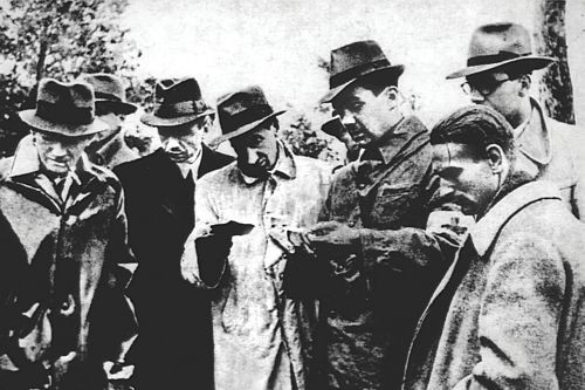 As a writer, Józef Mackiewicz wanted to be a credible witness of the history in which he participated. He created based on his own knowledge, but he also used historical sources, documents and testimonies of witnesses. That is why the content of his works is connected in various…

As a writer, Józef Mackiewicz wanted to be a credible witness of the history in which he participated. He created based on his own knowledge, but he also used historical sources, documents and testimonies of witnesses. That is why the content of his works is connected in various ways with his own biography and with the biographies of the people around him.

In 1942, Józef Mackiewicz went to Katyn to witness the exhumation of Polish soldiers. After his return, he published his interview in “Goniec Codzienny” called “I saw it with my own eyes”, in which he shares a shocking report of Katyn. Józef Mackiewicz will return to the subject of the crime more than once. In 1948, the book “The Katyn Massacre in the Light of Documents” was published, which was initiated and edited by the writer himself.

Józef Mackiewicz’s works were influenced not only by the events taking place in the country, but also by the place of his residence. As he himself writes in his essay: “I had the misfortune to live on the second railway route forking from Vilnius, but only eight kilometers from Ponary. Initially, in a country so saturated with war (…) little attention was paid to the arrows, which, regardless of where they came from, were already entangled in the normal rustle of pine trees, almost like the rhythm of the familiar rain, beating against a window in autumn. From these hills they echoed, het, into a circle of many kilometers, single shots, short, choppy, dense, sometimes lasting many hours, or alternately rattling bursts of machine guns”. (…) In the summer we couldn’t eat on the porch, when the shooting started in Ponary. Not out of respect for someone else’s death, but just like that, the potatoes with milk did not want to get down the throat somehow. It seemed as if the whole area was gobbling with blood.”

While in exile, the writer publishes reportages-stories “Ponary-Baza” and “Dymy nad Katyniem” in the weekly “Orzeł Biały”. These are the memories of the war and mass executions in Ponary near Vilnius. Czesław Miłosz in the “Rok myśliwego” gave an evaluation to these texts: “As long as Polish literature exists, these two records of the horror of the twentieth century should be constantly recalled.”

The most important works of the writer also include the novels: Sprawa pułkownika Miasojedowa (‘The case of colonel Miasojedow’) (1962), Lewa wolna  (‘Left free’) (1965), Droga donikąd (1955), Nie trzeba głośno mówić (‘No need to speak out loud’) (1969), Kontra (1957). The novels present a panorama of the history of that time: the collapse of tsarism (‘The case of colonel Miasojedow’), the Polish-Bolshevik war (‘Left free’), the occupation of Kresy by the Soviets after 1939 and 1945 (‘Road to nowhere’, ‘No need to speak out loud’), and finally the victory of the USSR after the Second war, sealed with genocide (‘Kontra’).

J. Mackiewicz’s goal was to convey knowledge about the world and historical events in an epic way. The author writes in the form of a fictionalized document. Accurate, precise, objective document. By focusing on the facts, he doesn’t comment on them. He leaves the evaluation of the events to the reader.