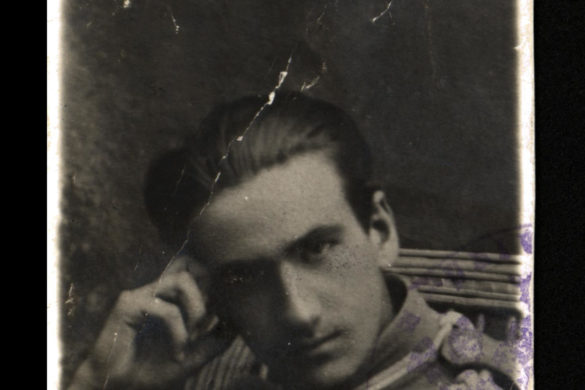 How was Józef Mackiewicz’s personality shaped?

You cannot deny Józef Mackiewicz his strong character, honesty and curiosity about the world. However, it did not come to him in adulthood right away. The process of shaping the personality took place in his family and the environment in which young Józek was brought up.

You cannot deny Józef Mackiewicz his strong character, honesty and curiosity about the world. However, it did not come to him in adulthood right away. The process of shaping the personality took place in his family and the environment in which young Józek was brought up.

Józef Mackiewicz was born on April 1, 1902 in St. Petersburg. He was the youngest child in the family – the oldest was Stanisław (writer and journalist), and the second child was his sister Seweryna (grandmother of Maciej Orłos – a journalist). They came from an old noble, intellectual family. Antoni Mackiewicz – Józef’s father – was the owner of St. Petersburg tenement houses and the director of the company ‘Fochts i Spółka’ importing wine to Russia. His mother – Maria née Pietraszkiewicz – came from a professorial and literary environment. Most likely it was she who instilled in young Józek patriotism and love for books. She herself manifested literary and artistic interests, which manifested themselves in the form of writing poetry or painting. She often read the Sienkiewicz trilogy for her children to sleep. Thanks to Maria, Mackiewicz’s house became a mainstay of Polishness, which welcomed many aristocrats, professors and merchants. Józef’s awareness and development were probably also influenced by frequent trips that the wealthy family could afford.

The story of Mackiewicz with Vilnius in the lead role began in 1907, when the whole family moved out of Saint Petersburg due to the cold climate, which was not conducive to the health of little Józek. In Vilnius at that time, occupied by the Russian Empire, the future writer was influenced by Stanisław Filibert Fleury – family friend, photographer and painter from Vilnius. Due to his personification and stature, he was called the ‘Elephant’, he revealed to the boy the world that we now see in his novels or reportages – landscapes near Vilnius, traders or insurgents. The artist died quite quickly when Józek was only 13 years old, but he left a very significant mark on his consciousness. As proof of this, it is possible to cite the fact that Mackiewicz remembered the interior and decor of Fleury’s apartment with photographic memory.

The great, if not the greatest, passion of Józef Mackiewicz was ornithology, the world of nature. Thanks to the class lady – Elizaweta Pietrowna, who gave Józek ‘Priroda’ by Bogdanow – the boy became fascinated with this branch of biology. He was also closely friends with Edward Łukaszewicz – a former insurgent and animal expert. It was not only a childhood fascination, as evidenced by the fact that he went to study in Warsaw to study nature. Attaching so much importance to nature is also evident in his novels, which are characterized by extremely rich descriptions of nature. It also formed his worldview in a way, because he believed that it was biology that proved to him that neither nationalism nor racism make any sense – because everyone is worth the same, in the face of the natural world.

It is difficult to write about something that has not been experienced, and Mackiewicz often resorted to military, political and social topics. Józef dealt with the war at an early age. Shortly after his father’s death in 1914, at the age of 17, he volunteered for the Polish-Bolshevik war. He served in the 10th Cavalry Regiment of the Lithuanian-Belarusian Division and in the 13th Vilnius Cavalry Regiment of Major Jerzy Dąbrowski ‘Łupaszka’. During one of the battles, he was captured by Lithuanians near Oranami and sent to prison in Vilnius. Under the influence of these events, he wrote his first mini-essay ‘Letter to the soldier-cavalry’, which appeared a few years later in ‘Dziennik Poznań’. It is also worth mentioning Józef’s brother Stanisław “Cat” Mackiewicz, who shared his love for words and writing. It was he who helped him publish his work a few years later in ‘Dziennik Poznański’. Thanks to him, he also got into the daily ‘Word’, where he published essays and articles for several years.

Józef Mackiewicz is an extraordinary and very colorful figure. He had many passions. However, its multidimensionality and intelligence did not come out of nowhere, but they were the result of many favorable circumstances.