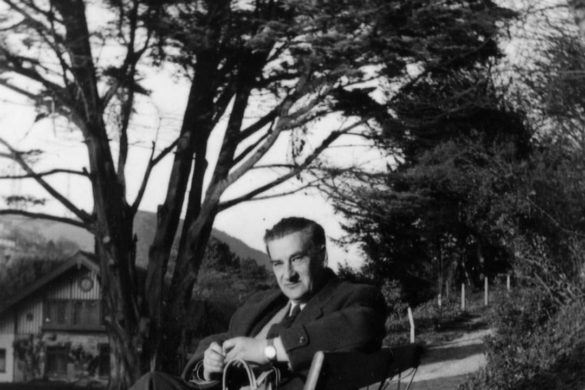 Józef Mackiewicz, together with his wife Barbara Toporska, spent the last thirty years of his life in Munich and wrote most of his novels here, but the years spent in Munich were characterized by poverty, and from Czesław Miłosz’s point of view it was simply “extreme poverty”.

Józef Mackiewicz, together with his wife Barbara Toporska, spent the last thirty years of his life in Munich and wrote most of his novels here, but the years spent in Munich were characterized by poverty, and from Czesław Miłosz’s point of view it was simply “extreme poverty”.

When the writer’s wife fell ill with cancer in 1963, the Voice of America radio station, with which Barbara worked, refused her any financial assistance, and after the operation her earnings were reduced. In addition, Mackiewicz’s last hope of getting the promised post at the Institute for the Study of the USSR was dashed when the employer unexpectedly changed his mind and canceled the post. Józef Mackiewicz himself often wrote about poverty and difficult material conditions: “My personal “prosperity” is such that sometimes reading about the conditions in which writers live there… sometimes seemed to me an unattainable fairy tale.”

When the French translation of “A Road to Nowhere” was published, the writer explained in a letter to Mieczysław Grydzewski that he could not send him the book, because the publisher gave him only ten author’s copies, and the book was expensive: “And the copies were even worse. I received a ridiculously small amount of copyright (10). I had to send six to one of the “patrons” who are mentioned in the dedication. Leave one for myself. I only have three left for the rest of the world. A lot of people got offended by me, who once sent me their own, or in some other way could expect me to send them a dedication. (…) As a result, I started buying on my own. Admittedly, it costs me less as an author – that is, only $5 each. But as you can probably guess, these are the dollars I miss the most.”

The Mackiewicz family received the most substantial financial help from Barbara Szubska, a Polish woman living in Florida. She organized the Circle of Friends of Józef Mackiewicz, which helped the writer financially.

While in exile, the writer tried to make a living only from literary pursuits, during this period he wrote a lot, but he was particularly interested in translating his works into foreign languages, which often ended in failure. And although in the 1950s and early 1960s he managed to realize some of these intentions, in the last twenty years of the writer’s life, efforts to obtain translations were impossible for unreasonable reasons. Czesław Miłosz comments on the translation and publishing failure of J. Mackiewicz in the following way: whenever an American publisher intended to publish Mackiewicz’s work, there was always someone who convinced the editor to abandon the idea. In addition, accusations against Mackiewicz were constantly repeated, who still remembered his votum seperatum from the war and were accused of collaboration, which tied the writer’s hands even more. An example of such a situation were attempts to publish the writer’s works in German translation in the “Polish Library” series edited by Karl Dedecius. Even advanced preparations for editing, even the translated novel ‘No Need to Speak Up Loud’, despite several repeated attempts to publish the book, always ended in failure.

Commenting on Mackiewicz’s difficult situation with publishing books, Andreas Lawaty explained that Mackiewicz’s prose was very valuable to the historian, credible and interesting. However, it was very difficult for Mackiewicz to talk to people from the “Biblioteka Polska” publishing house – the reason was J. Mackiewicz’s political attitude and his accusations.

During the Munich period, Józef Mackiewicz was very interested in the politics of the German state, and he was particularly interested in the attitude of the state to communist ideology in Europe. He actively participated in meetings of historians and Polish and German writers – in the so-called Lindenfels talks and other events aimed at getting to know each other and trying to look at the history of Central and Eastern Europe together. He actively participated in conferences, wrote and published in journals dealing with these issues.